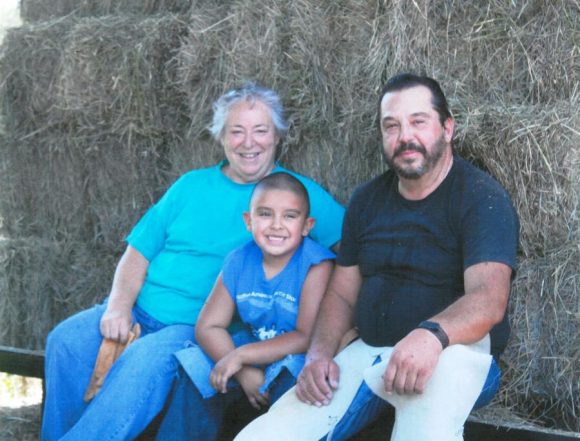 Ricardo has been tending bees since 1990. He didn’t plan on becoming a beekeeper. In fact, he didn’t even know that he was going to become a beekeeper when it happened. But his father-in-law did.

As he tells the story, “I would help him check his hives or collect the honey from different locations. One day we were out collecting some hives and he tells me, ‘let’s go to your house, I’m thirsty.’ Then he tells me. ‘I will leave these bees over here.’ I asked why he was leaving his bees at my house and he says, ‘no, they are your bees.”

Ricardo proceeded to learn the trade with his father-in-law. When he started at the Santa Fe Farmers’ Market, he just came on Saturdays because he worked at the lab in Los Alamos. Ricardo has retired from the lab, and RZ’s Bees is operating at just the right capacity for him, “I’m actually pretty happy with what I have right now because I can do a fairly stable three markets a week.”

Ricardo keeps around 65 hives. There are more than 20,000 bees in each hive, and they yield close to 200 gallons of honey each.

On the flip side, his favorite part of beekeeping is the ever-present sound of the buzz. “Fifteen years ago, we got mites that killed the bees. I missed hearing the bees as they worked on the fruit trees or in my garden. It’s always good to hear the buzz; the silence from it’s absence is very noticeable.” 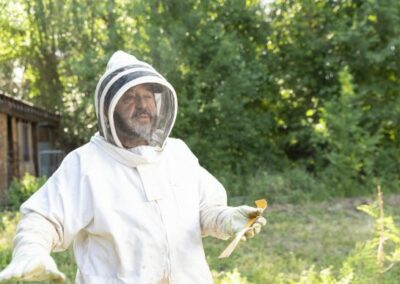 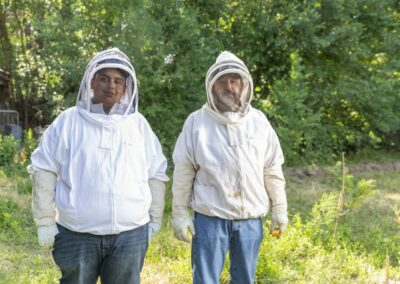 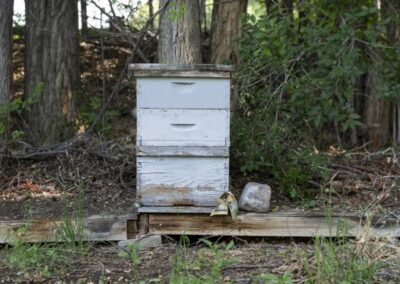 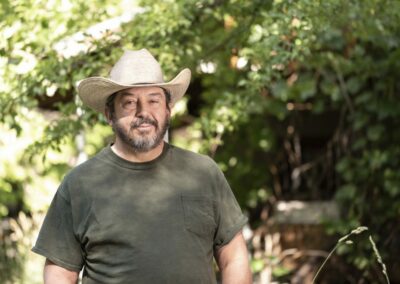 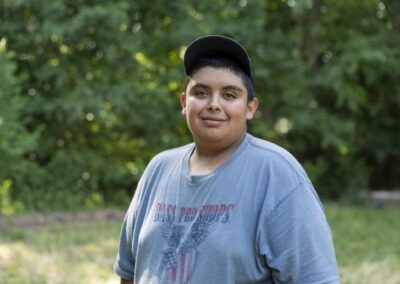 Ever wonder what to do if you see swarming bees? Call Ricardo. It happens often. “A lot of people are terrified of swarms. But, the bees are actually easy to handle when they’re swarming. They usually can’t sting you because they filled up on food before they took off from the old hive to find a new one.”

The honey at RZ’s Bees is what we call “free-range.” The bees roam around near Ricardo’s house in the Rio Grande valley, as well as at several farms that Ricardo trusts will never use pesticides. The honey has a lovely and distinctive flavor because the bees collect from a variety of fruit trees, clover, and flowering trees like the Locusts that his father planted.

RZ’s Bees sells pollen and unfiltered, raw honey. This is important because the “local raw honey is good for allergies. The stuff the bees are collecting is the same pollen that you’re allergic to.” It helps you build up your autoimmune system. To use pollen to help against allergies, add the pellets to food, like a smoothie or some yogurt. Start at less than a teaspoon, and increase as you are comfortable.

In addition to the medicinal effects of what the bees produce, the actual bee is medicinal. “Bee stings help with arthritis, if you don’t mind getting stung. Also, there was a doctor in Santa Fe who would buy bees from me and use them to help her patients with M.S.”

RZ’s Bees has been selling at the Santa Fe Farmers’ Market for almost 30 years. Throughout that time, Ricardo’s late wife, Deborah Hayes-Sanchez, was an integral part of RZ’s Bees. She was by his side at every market until her passing in 2018. She loved selling their honey and she was instrumental in managing the business by helping with the paperwork, bookkeeping, and ordering. But, more importantly, Deborah was the love of Ricardo’s life, and that love endures.

Ricardo’s oldest grandson, Marcos, has stepped up to help him run the business. You can often find Marcos at their booth when school is not in session.