The Story of the Institute

Supporting the Farmers’ Market and local farmers since 2002

The Market originated in 1968 as a project of the agricultural program of the League of Women Voters, the farmers and the Santa Fe County Extension Office, with six vendors on a church parking lot. It changed locations often, and was cold in winter, so farmers and community members began to consider what it would take to find a permanent location, and ideally, a year-round venue.

In December 1995 the City purchased the 50-acre parcel now known as the Railyard. A community planning process ensued.  Farmers’ Market Executive Director Pam Roy and culinary writer Deborah Madison represented the market through the long February 1996 sessions. Public participation in the Community Plan was extraordinarily high.  The final plan emerged with the Farmers’ Market as one of the top uses for a portion of the Railyard.

Project director and farmer Stan Crawford worked with Market Executive Director Pam Roy to raise money from the USDA and Congress and a half dozen private foundations for the future Railyard Plaza and Alameda, obtaining a three year $100K/year Ford Foundation grant to pay for the planning phase.  They used Project for Public Spaces to bring in the UNM Department of Architecture and Planning Program, as well as management from Vancouver’s Granville Island, a successful industrial redevelopment site not unlike the Railyard, and worked with other Farmers’ markets in various stages of developing permanent venues. The Market moved from the Sanbusco parking lot onto the Railyard in 1998.

The Santa Fe Farmers’ Market Institute was formed when became apparent that it would be necessary to have a free-standing nonprofit to sign the Railyard lease and spearhead efforts to scale the $5 million dollar mountain to pay for its new building. In 2008, under the leadership of executive director Sarah Noss and former board chairs John Strow, followed by Matt Romero and eventually Bob Ross, and with the generous support of numerous foundations, the New Mexico legislature (via the Local Economic Development Act), and countless donors, it had accomplished the feat. Other major players in the development process were farmers Phil Loomis and Don Bustos.

In November 2005 the Santa Fe Farmers’ Market Institute signed an 80-year lease for Lot H in the Railyard. In September 2006 a contract was signed with Cameron Construction, Santa Fe and Huitt Zollars Architects, Albuquerque to design and construct the building. They broke ground on Lot H of the Railyard in June 2007. The 25, 321 square feet building was completed in 2008, at which time several distinguished artists donated art for the building. In 2009 the building received LEED Gold Certification from the US Green Building Council.

The first Farmers’ Market session in the Railyard was held Tuesday, September 2, 2008, largely inside the new 9,300 square foot market pavilion, as work was still being completed on the adjoining Alameda and Plaza areas.  Saturday September 6th was the market’s first full-blown day, to enthusiastic capacity crowds and happy farmers.  Soon forgotten were all the temporary sites the Farmers’ Market moved to during the ten years between the Sanbusco parking lot and the permanent site on the Railyard, including two different sites on the Railyard itself, the DeVargas Mall parking lot, a parking lot near the State Capitol, plus indoor winter markets at the Rodeo Grounds, in the Museo Cultural building on the Railyard, and inside the old Healy-Mathews building on Cerrillos Road, indoor spaces notable for being dark, noisy and crowded.

Institute programming launched in 2006 with a movie series that ran for seven years, screening 33 films to a combined audience of 2,000 people, plus in schools throughout the region.

In 2007 the Institute Food Stamp program, now known as the Supplemental Nutrition Assistance Program (SNAP) began, growing to $84,000 in food stamp transactions in the first ten years, and to nearly one million in transactions by the end of 2021. In September 2010 the Institute received $20,000 in Federal Stimulus money to double value incentive to the Food Stamp community, creating a program now known as Double Up Food Bucks.

Other health-related initiatives included the FreshRx program, where doctors issue their patients “prescriptions” for four $25 vouchers for fresh fruits and vegetables from the Santa Fe Farmers’ Market and facilitating market vouchers for Presbyterian Hospital staff, a children’s nutrition Program, and Local Organic Meals on a Budget Classes:  30 cooking classes in 2011 and 2012.  The Institute also administers vouchers for the WIC (Women, Infant and Children) and senior citizen programs.

In 2008 the Institute launched a microloan program to give vendors the opportunity to apply for low interest loans in increments of $5,000 for a first loan and $10,000 for subsequent loans. Since that time total of 373 loans have been granted to 99 borrowers for a total disbursement of $802,590.  In 2022 the Board approved offering loans of up to $20,000 through Guadalupe Credit Union at 5 percent interest.

Professional development workshops for farmers began in winter 2011, with sessions on marketing and niche development, soil fertility and business planning and record keeping. Over the years workshops expanded to greenhouse propagation, hoop house construction and soil fertility.  The Institute Education Fund sent 24 vendors to the New Mexico Organic Farming Conference in 2012 and has continued to offer vendor scholarships to farming and food related conferences.

There was also an ongoing focus on children, including a public school children’s nutrition program, implementation of the Farmers’ Market Association the Power of Produce (POP) Club. Most recently the Institute has partnered with Cooking With Kids to provide workshops to kids and their parents.

Recognizing that the south side of Santa Fe had limited access to fresh, local food, there have been a series of efforts to launch a satellite market there beginning in 2004. The goals were to enhance the diversity of the customer base, and to reach a lower income population, offering WIC for children and seniors, SNAP and Double Up Food Bucks. Lacking a permanent location, the Del Sur Market moved often. In 2019 Presbyterian Hospital offered their parking lot. In 2021 the Institute, the Market and Presbyterian partnered to expand offerings, collaborating with vendors to bring more diverse products and with local nonprofits to provide more services. The combination of an ongoing location and more services brought in more shoppers and greater visibility.

In 2019 almost all programming was discontinued due to the COVID pandemic and staff departures. The Microloan program continued but slowed due to vendors’ concerns about assuming debut during this period of uncertainty. In contrast, the SNAP/Double Up Food Bucks program grew exponentially. In 2019 $149,022 in fresh produce dollars were distributed through our token system; in 2020 it grew to $294,126; and in 2021 the Santa Fe Farmers’ Market Institute experienced a record-breaking $375,424 distributed to qualifying families for fresh, local produce, increasing by 152% over three years.

One silver lining of the pandemic was the that it created an opportunity to do a thorough evaluation of past and potential future programming, envisioning what more could be done to accomplish the mission, including what board and staff structure, partners and funds would be needed. Identified priorities were as follows:

Longer term: Explore ways to support and/or partner with organizations that support women in agriculture and support for solar initiatives. 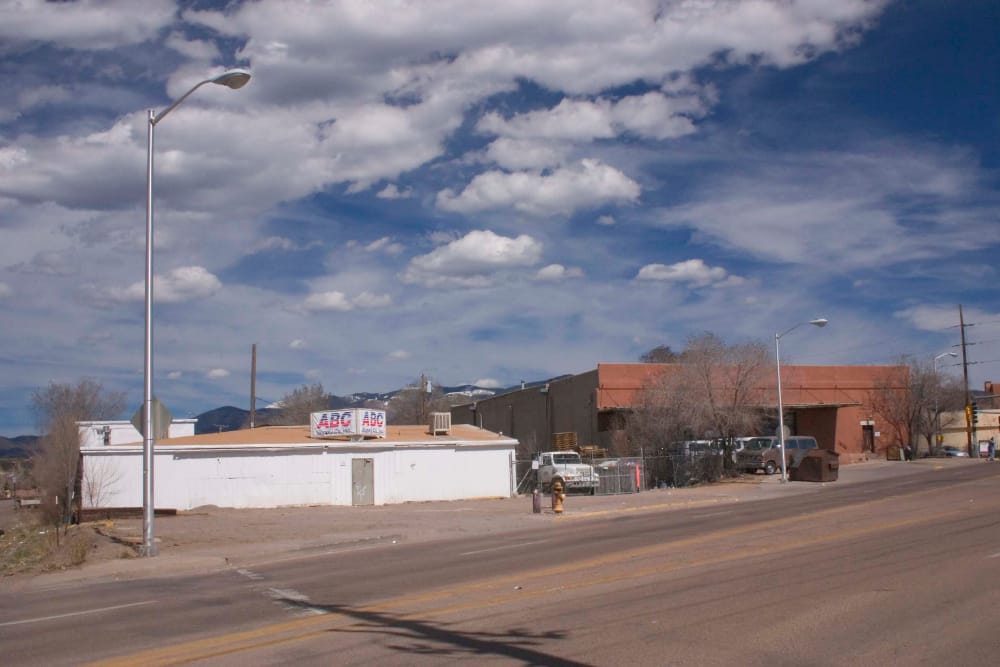 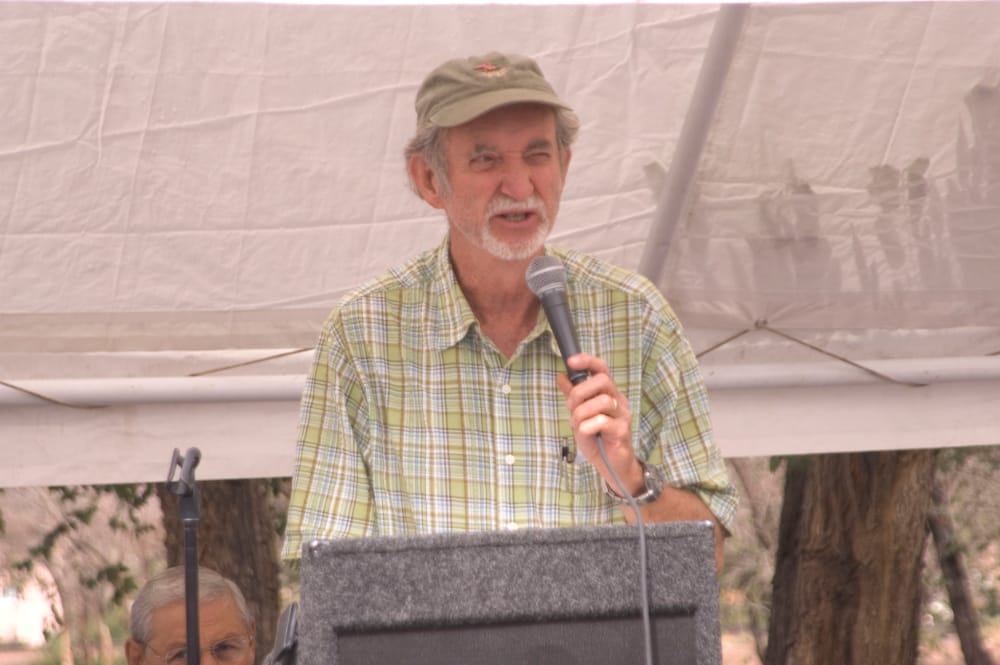 Farmers' Market emerges as a top priority for a portion of the Railyard in the community planning process led by a consortium of farmers, including Stan Crawford of El Bosque Garlic Farm. 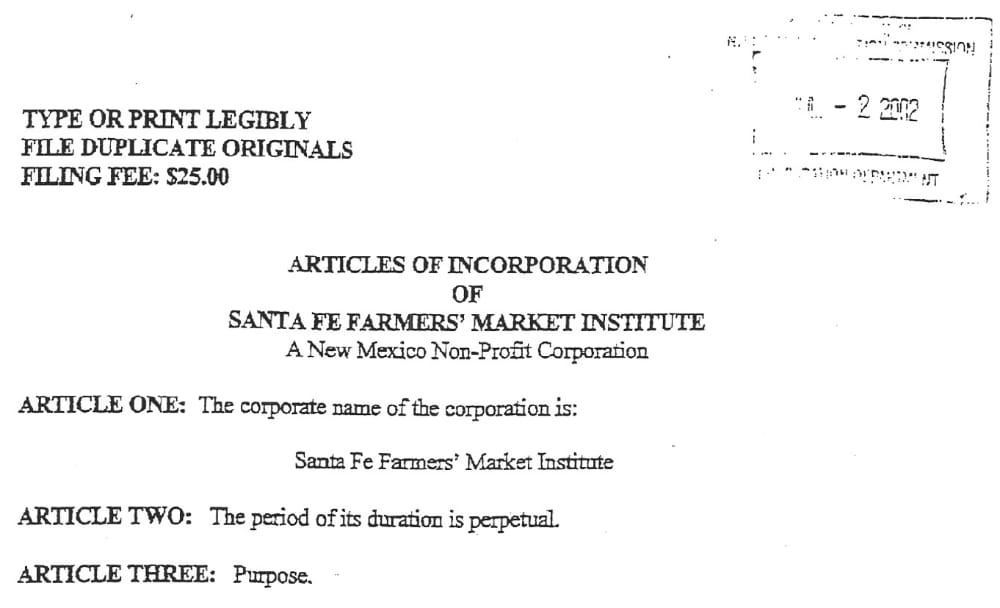 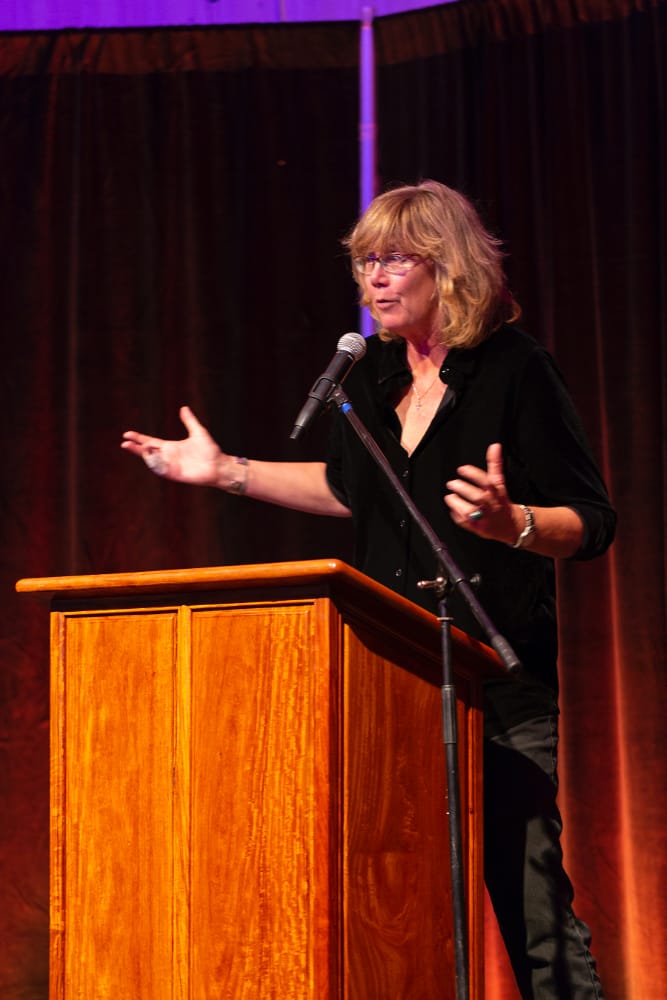 Sarah Noss hired as Executive Director, a post in which she served through April of 2013. Noss was recognized for her "groundbreaking" work to scale the $5 million mountain to pay for the new building.

Institute Signs 80-year lease with the City of Santa Fe to lease the land at 1607 Paseo de Peralta, then thought of as "Lot H" 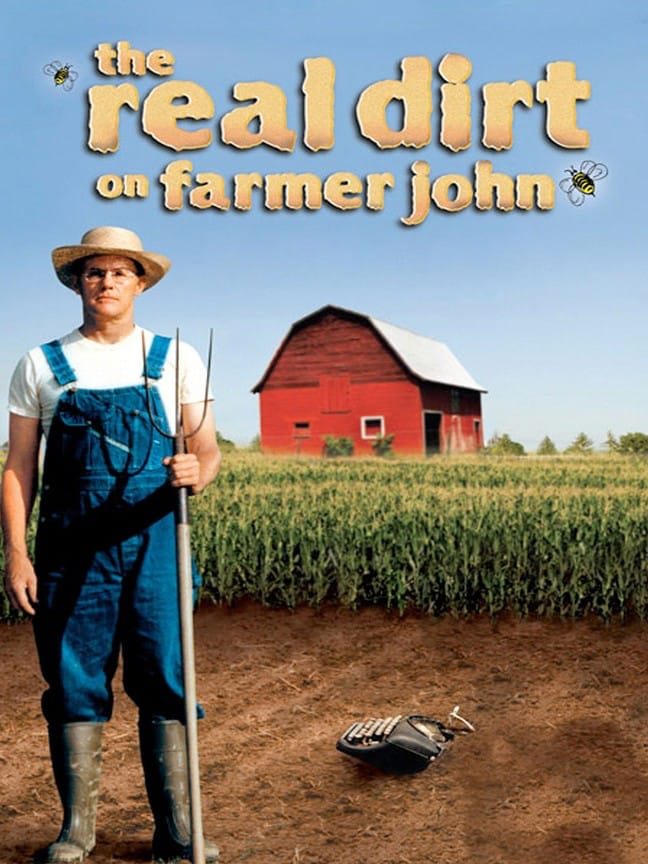 Institute shows the film The Real Dirt on Farmer John at Cinema Café (1616 St. Michaels 'Drive) to raise funds to offset Governor Richardson's $75,000 cut in State Funds for Market operations. The success led to the launch of an agriculturally-oriented seven-year movie series. 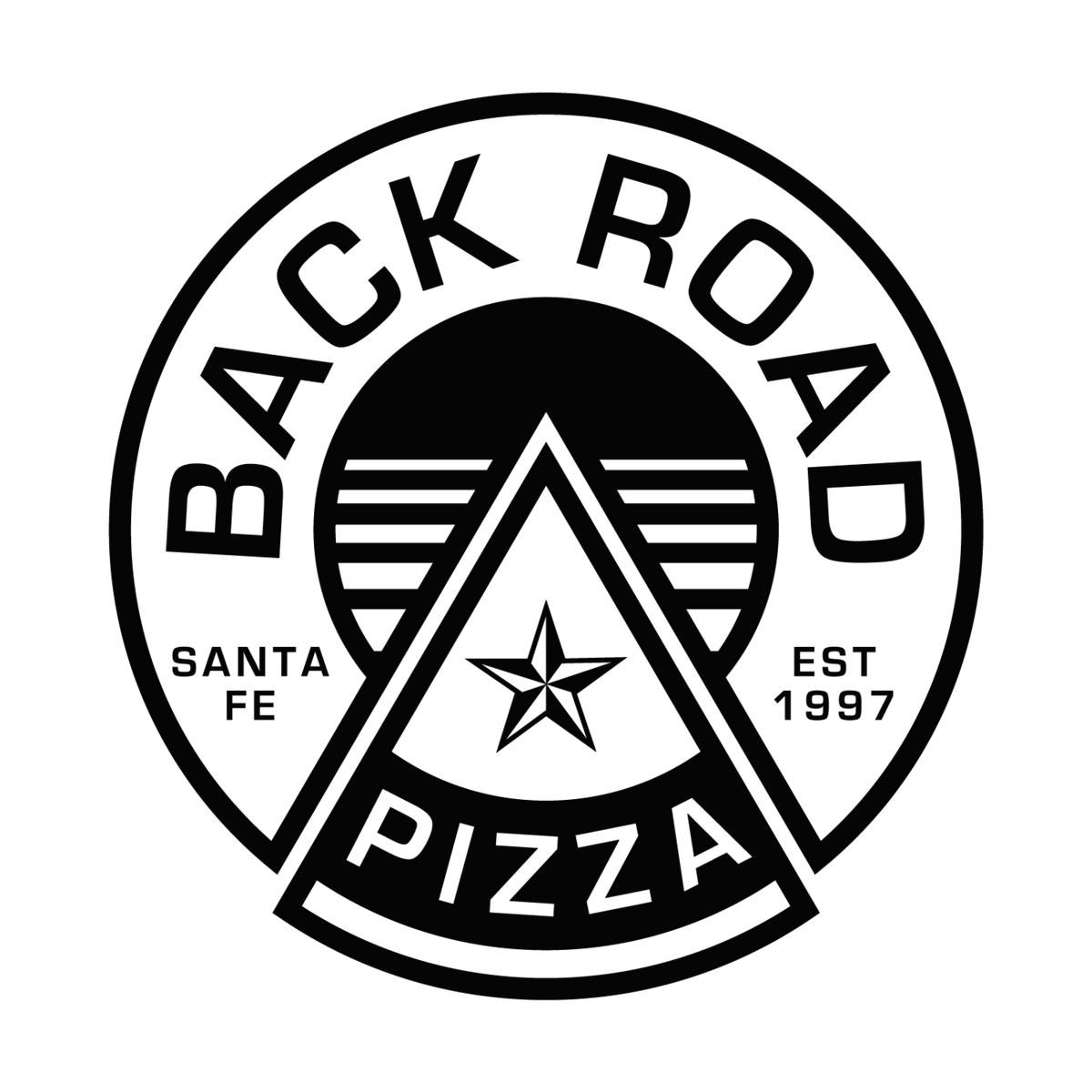 Backroad Pizza and a dozen more Santa Fe restaurants donate a portion of their proceeds to the Building Fund, further strengthening the farm to table relationship. 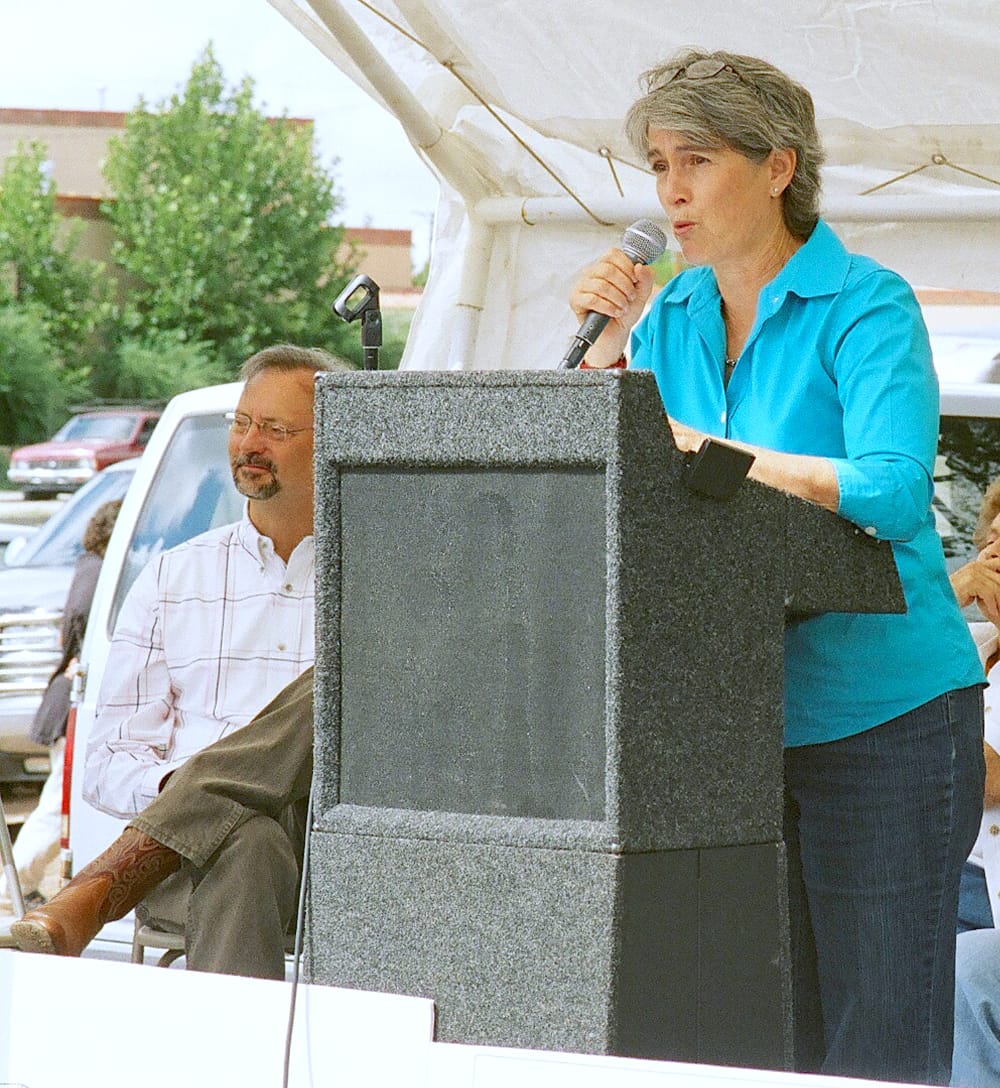 Farmer Rose Trujillo of Nambé was the first to break ground for the new building, with Eloy Trujillo not far behind. Sarah Noss weilded a pick hammer for the occasion! 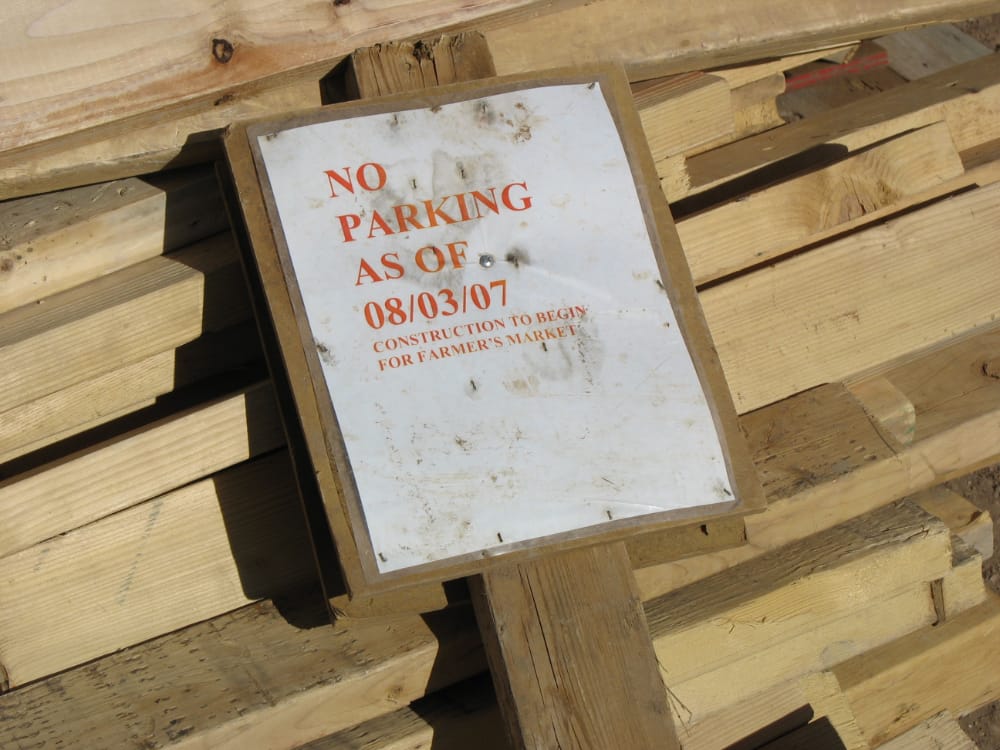 Institute receives a $22,000 grant toward the building fund from a consortium of Los Alamos National Laboratory subcontractors 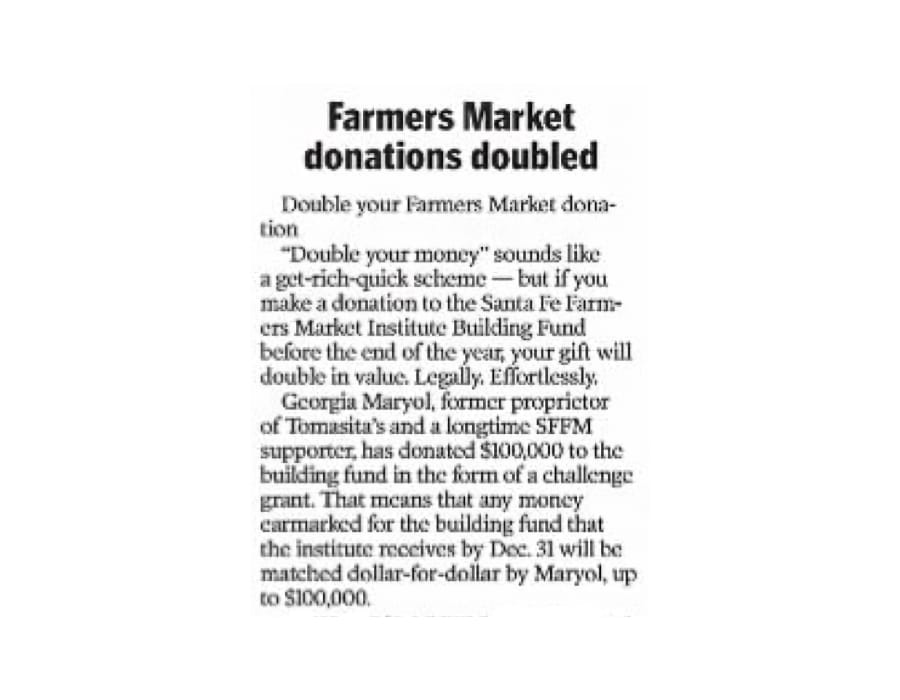 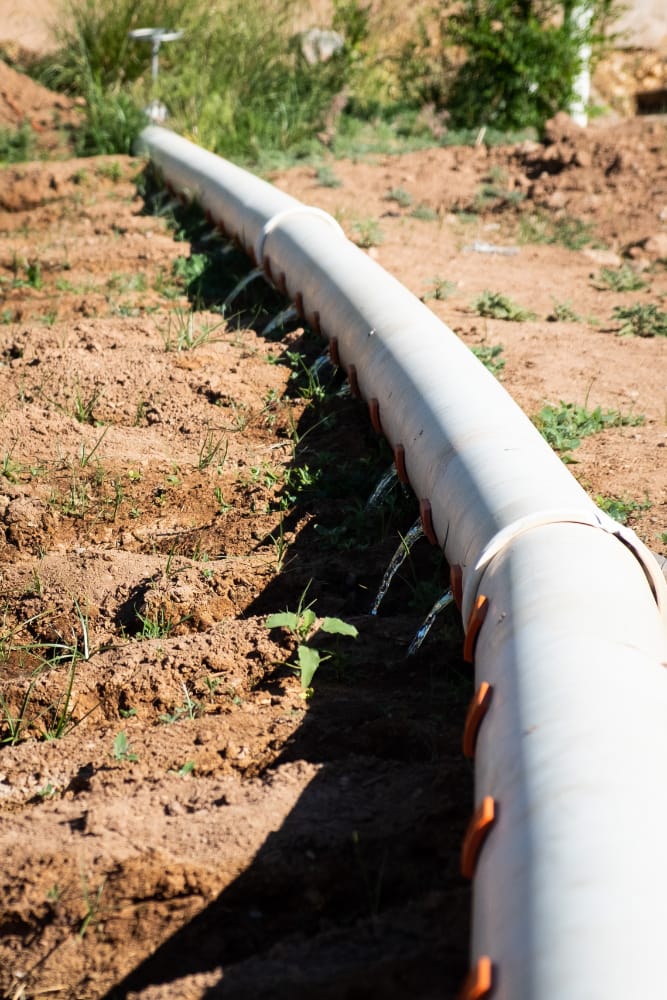 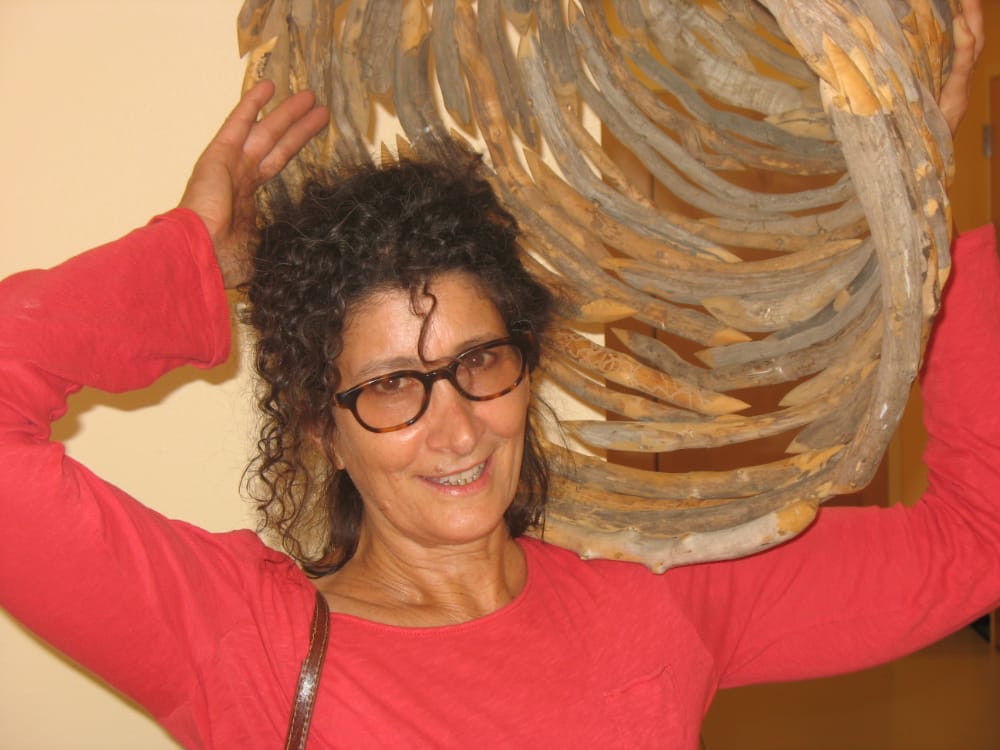 Gina Telcocci pictured with her sculpture which hangs in the stairwell leading to the administrative offices. 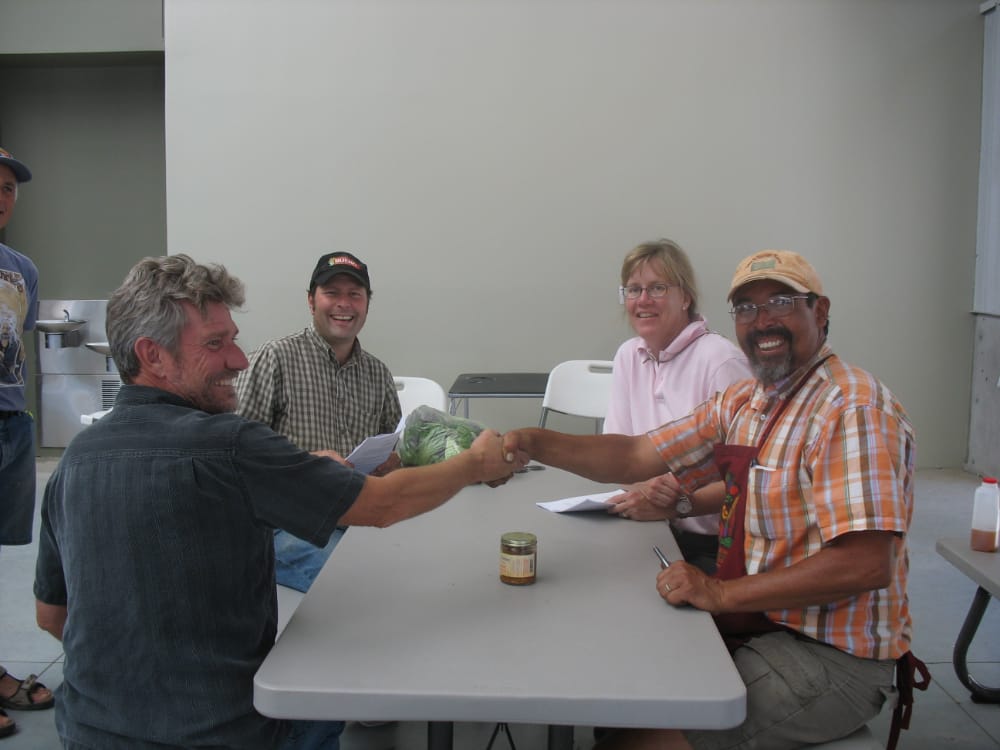 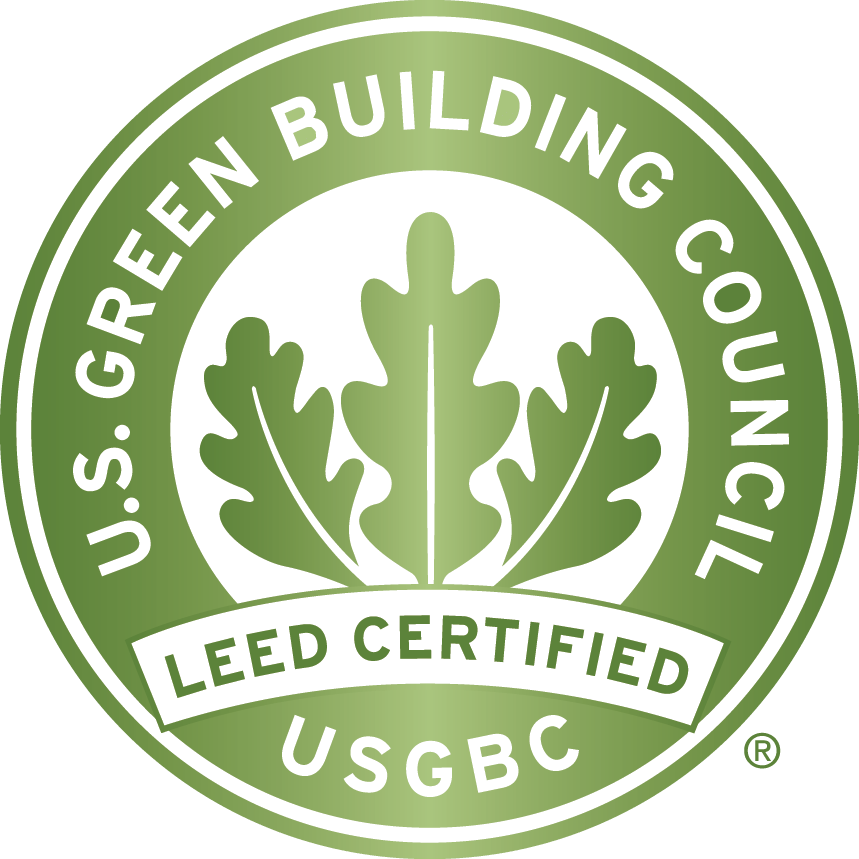 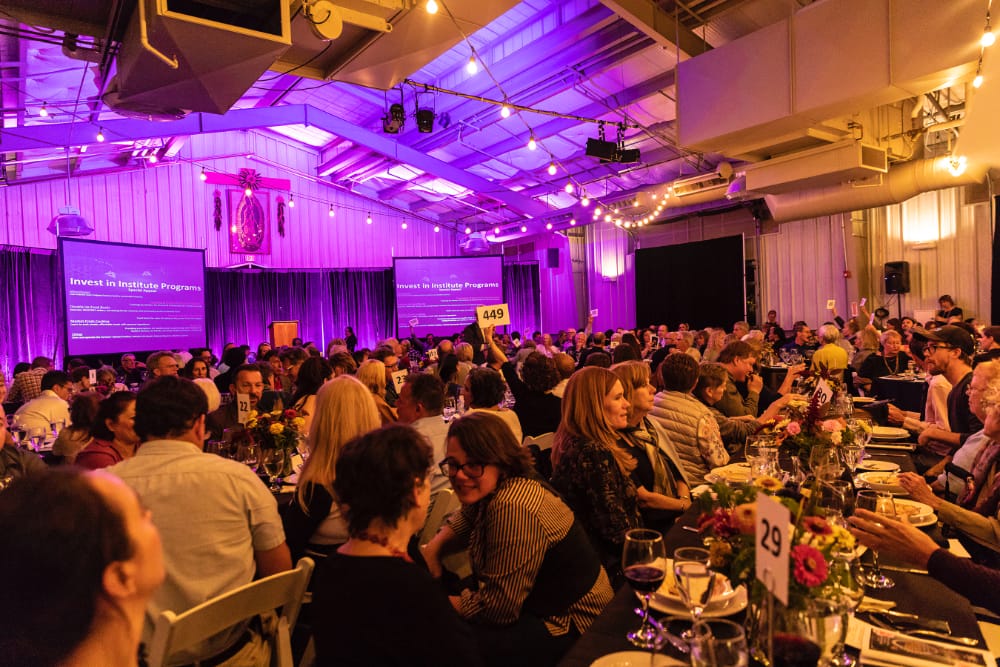 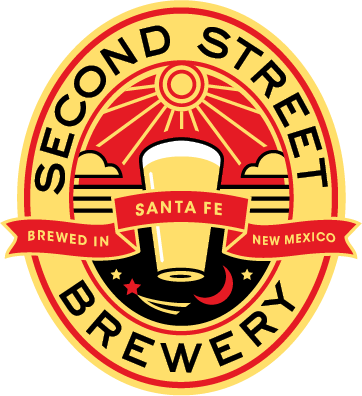 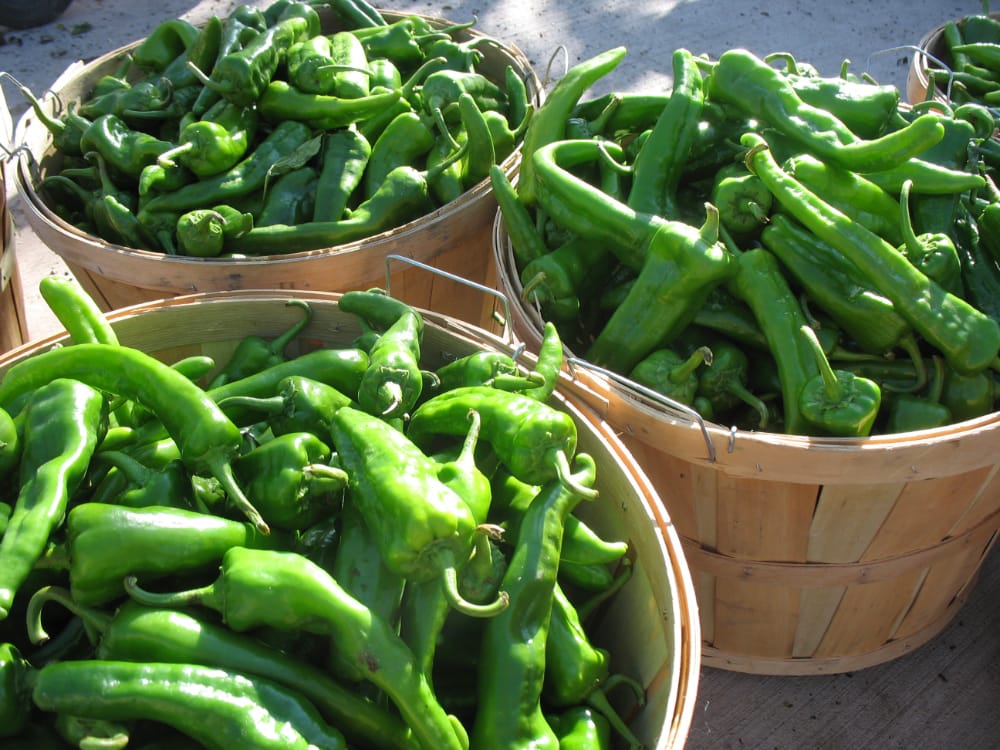 "Chilelicious?!" Green Chile Cheeseburger Smackdown, a collaboration between the City of Santa Fe Convention and Visitor's Bureau and the Institute, takes place at the Market Pavilion with local chefs vying for top honors and the People's Choice Award. Proceeds benefit the nonprofit Institute. 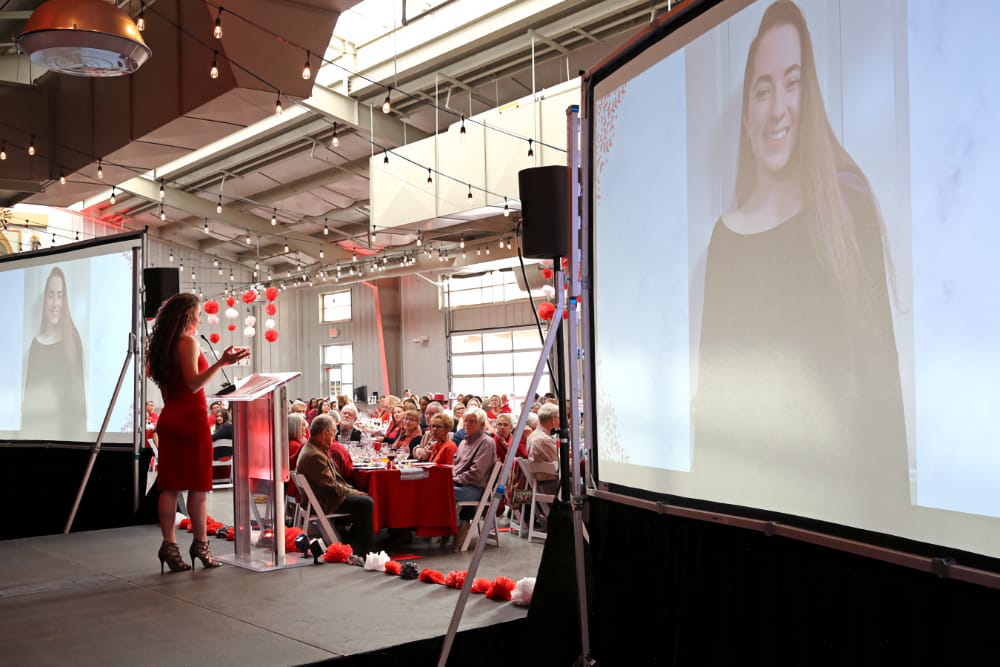 "Salaam-Shalom: A Celebration of Peace" Nonprofit Creativity for Peace hosts a discussion with young women from Palestine and Israel, one of many nonprofit organizations that rent the Pavilion for workshops, conferences, and fundraising events. In 2022 the tradition continued with the Girls Inc. event in the Pavilion. 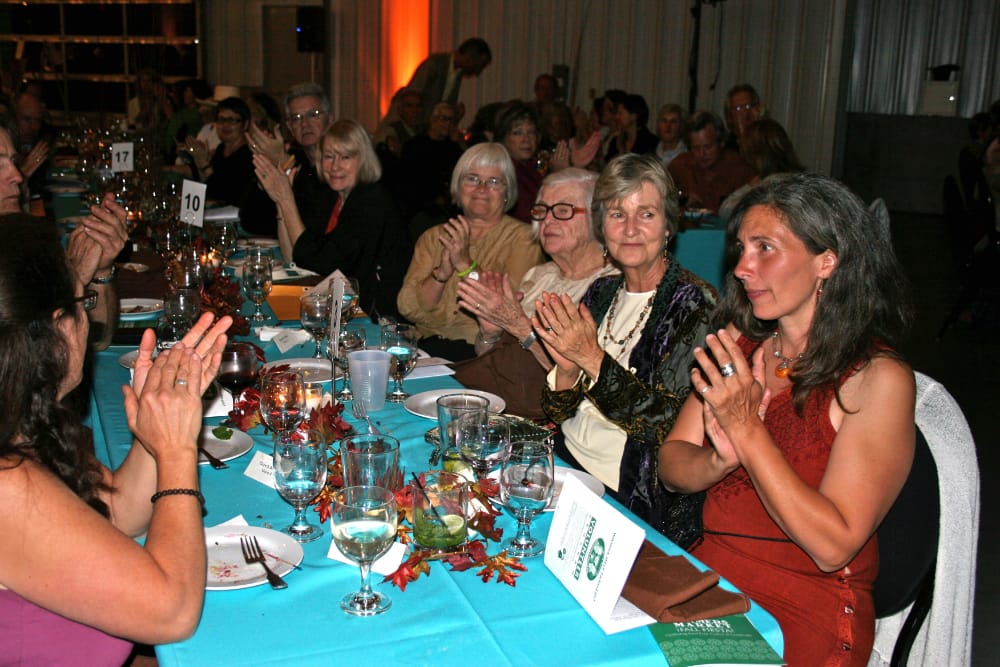 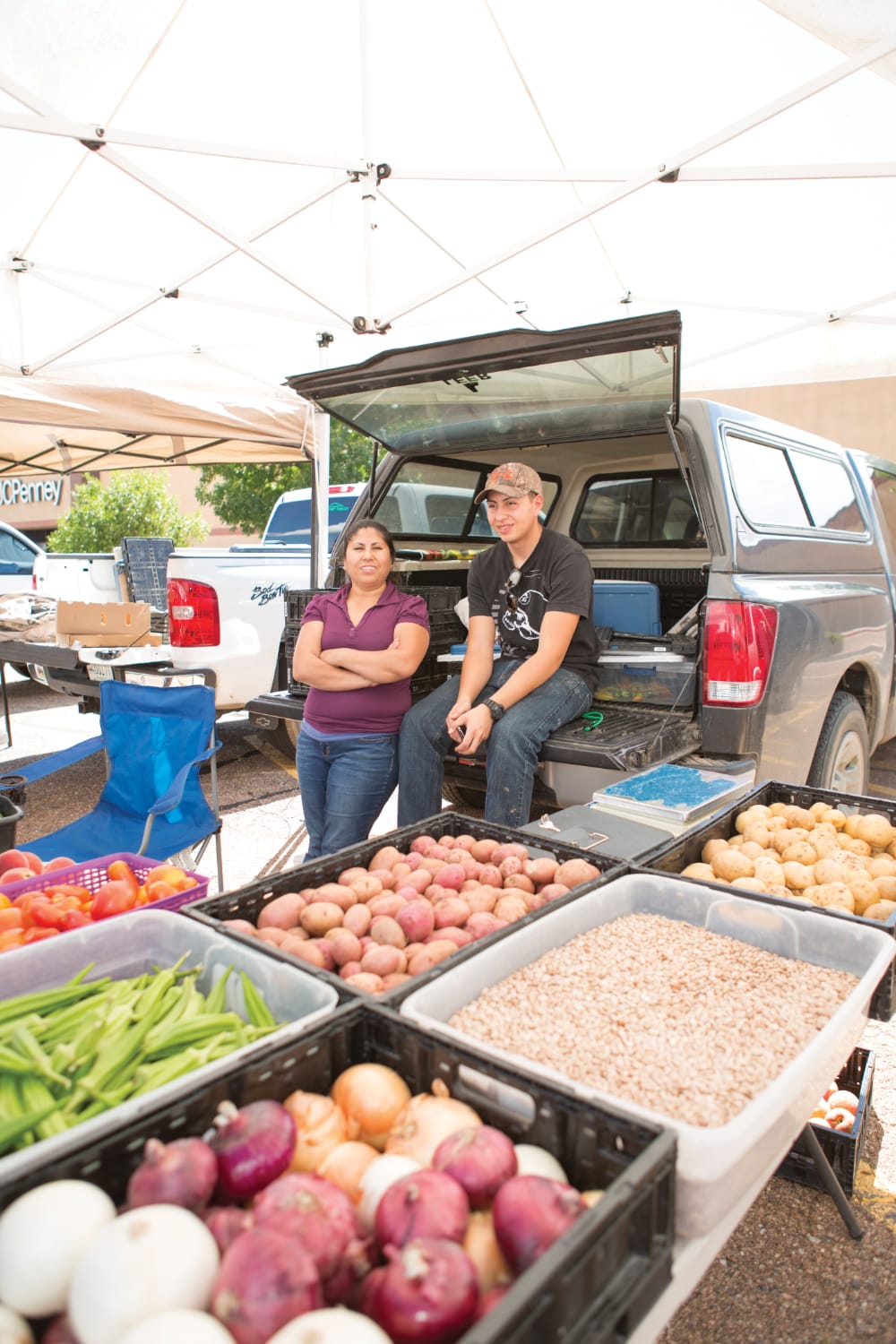 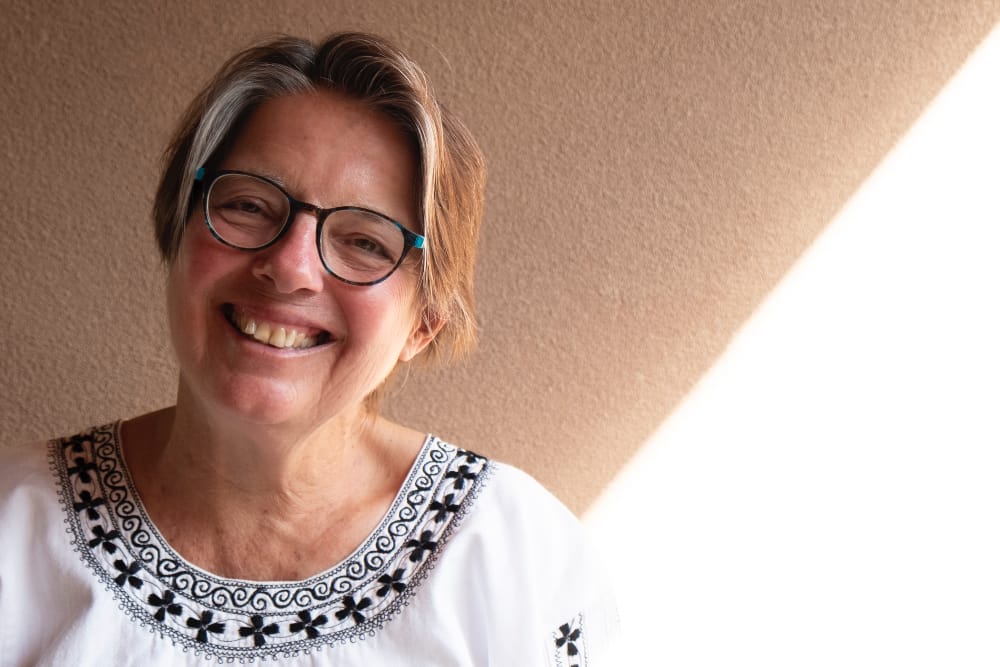 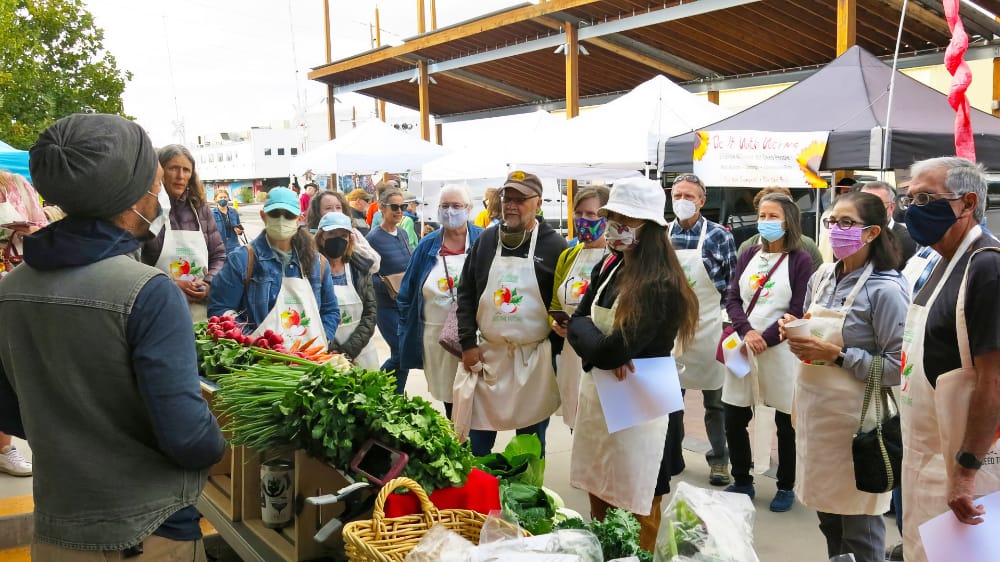 Tour leader Mary Dixon (far left) introduces a recent tour to her farmers from Green Tractor Farm. Naturalist, birder, and award-winning writer and tour attendee Priyanka Kumar(far right) illuminates the gift of the land as she takes readers on journeys to “historic and wild fruit orchards, to ancient forests, and along pollinator corridors,” in her forthcoming book. Photo: Christa Dalian 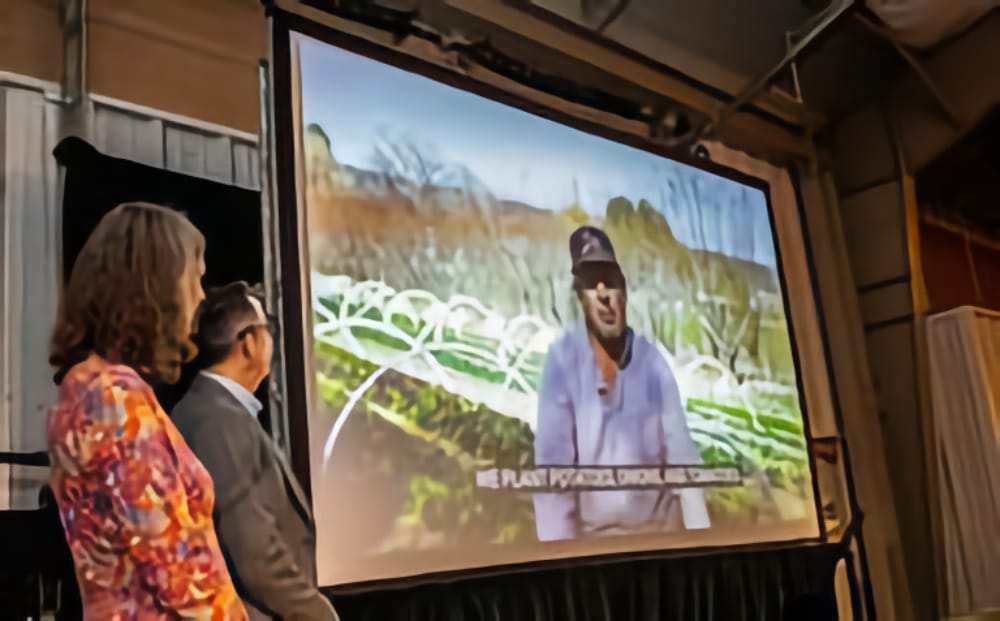 First community gathering held in the Market Pavilion post-pandemic. Six All Star Farmers were recognized during the sold-out event. 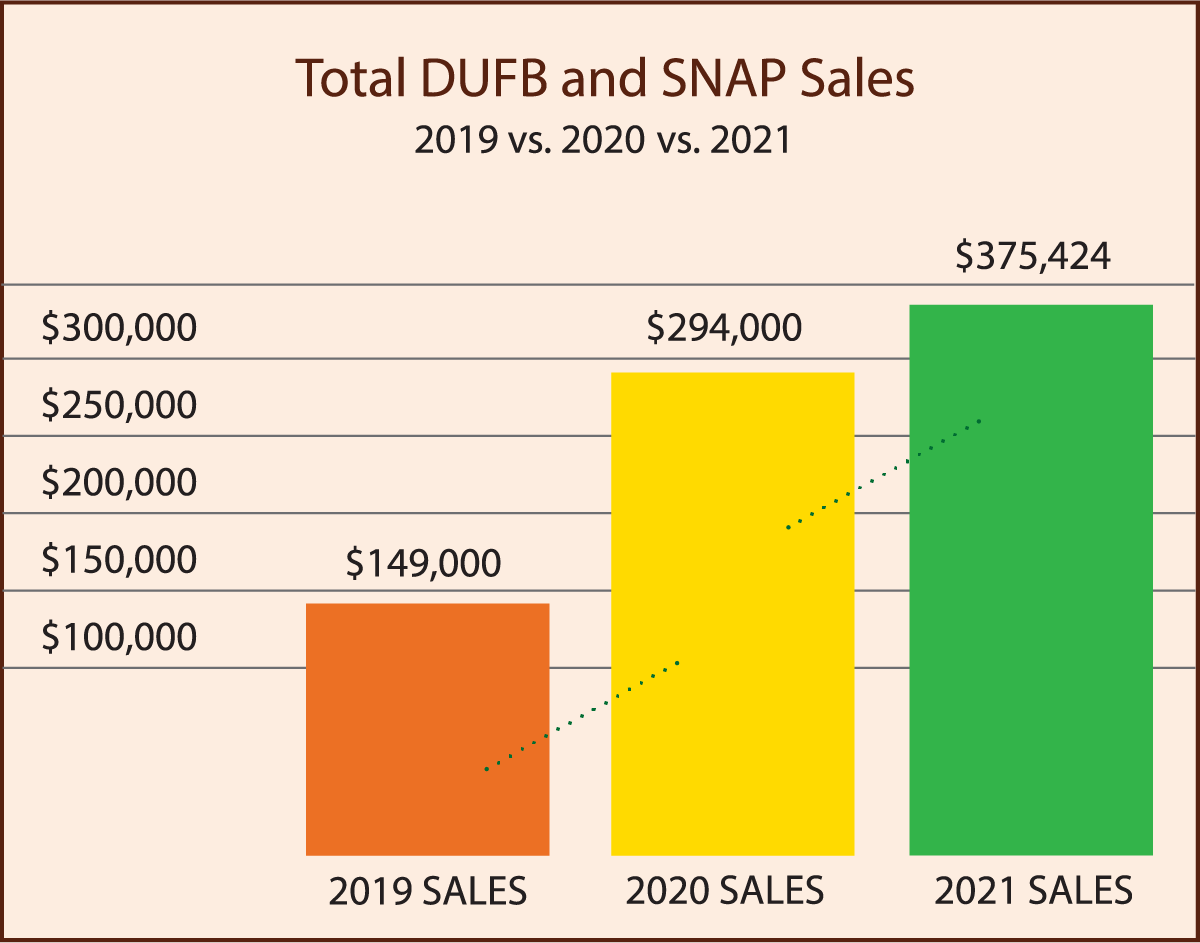 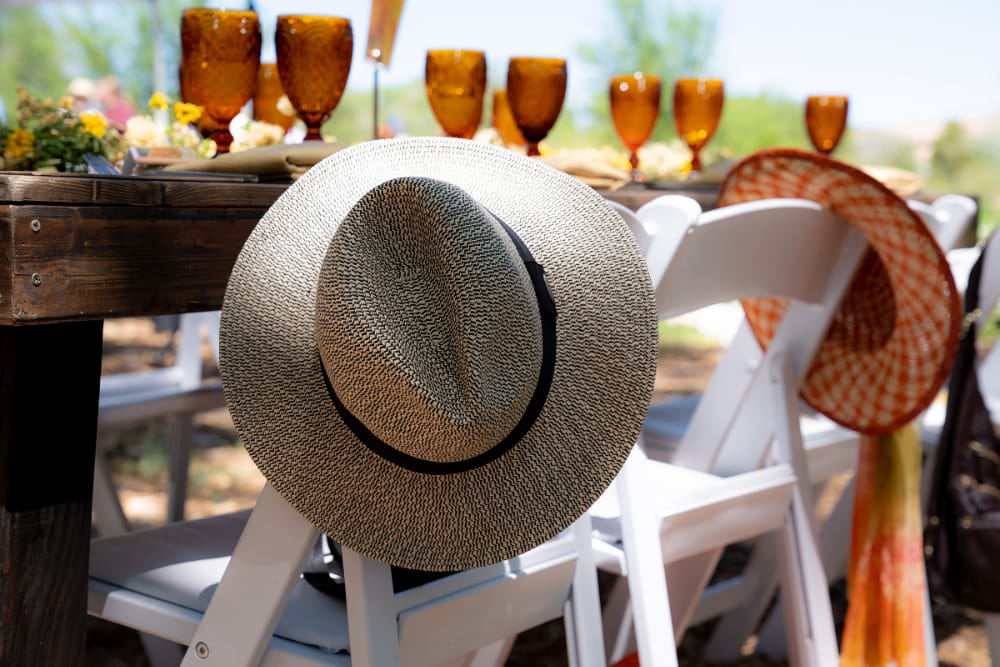