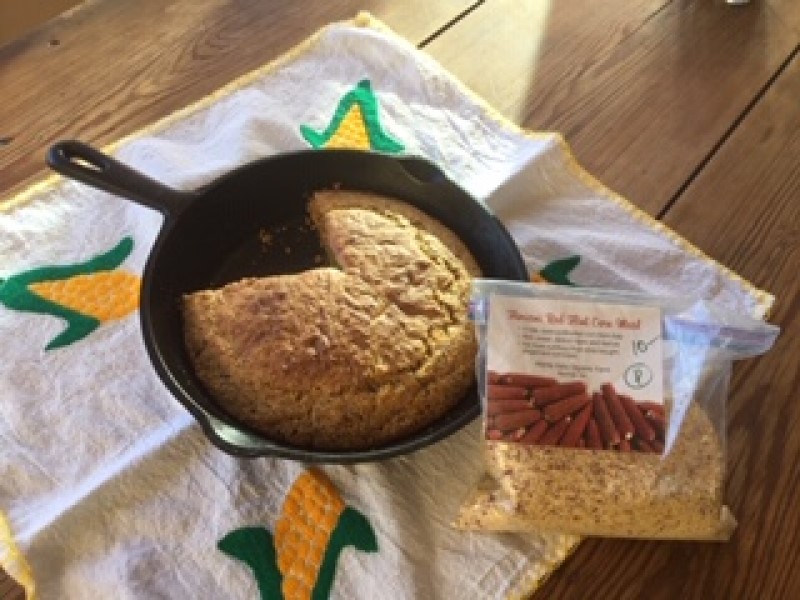 I consider myself a connoisseur of corn bread. After all, I’m an old southern girl who grew up on it and loves to make it to this day. At a market last month, I bought a bag of Floriani Red Flint corn meal from Monte Vista Organic Farm, and it produced one of the most delicious and nicely textured corn bread I’ve ever enjoyed. It was so good that I wonder if I can ever make corn bread again with any other corn meal.

The recipe I’ve relied on for most of my adult life is from Linda West Eckhardt’s The Only Texas Cookbook (Austin: Texas Monthly Press, 1981). She calls for sugar, but I’m of the school that considers sugar heretical – a northern touch that’s not legitimately southern — and wouldn’t dream of including it. And in fact, including flour is a bit heretical for me. My mother and grandmother made corn bread without any flour whatsoever. I tried to emulate them for years but never could make it turn out right and finally had to resort to including flour.

In addition to omitting sugar, I also omit Eckhardt’s final touch of turning on the broiler to brown the top. Mine browns fine without doing this.