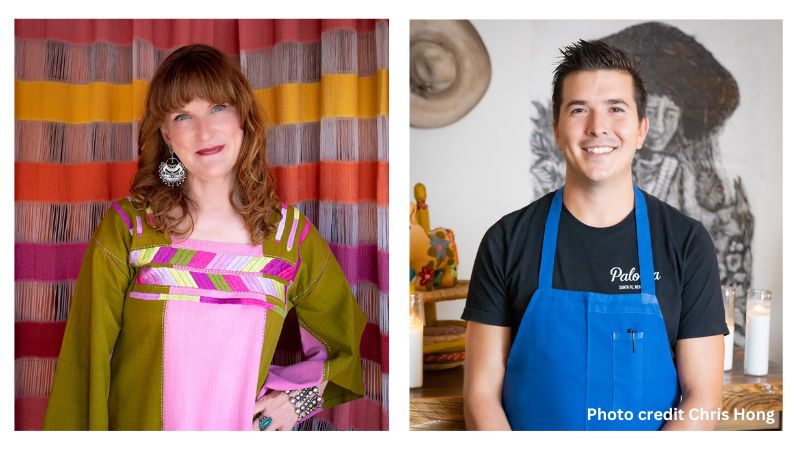 Paloma Owner Marja Martin feels that she hosts a dinner party every night at her intimate Santa Fe restaurant on South Guadalupe Street. “I enjoy having people come into my space, and to have them greeted warmly,” She said, adding that Chef Nathan Mayes and I wanted our restaurant to be an expression of love: love of the Santa Fe community, love of Mexico, and most especially love for the design style, restaurant culture, and local food in Northern New Mexico.”

The successful team of Marja, a well-established caterer in Santa Fe, and Chef Nathan is the result of a Craigslist overture. “After decades of catering events and parties in public spaces and other people’s homes, I began to dream of doing something different,” Marja said. “I put my commercial kitchen up for sale, and Chef Nathan responded to the advertisement. When he came to look at the space, we began talking about what a great restaurant would be, and we found that we were in total alignment.” As a result, they opened Paloma together in 2017. Chef Nathan said that he envisioned the menu to be a “fresh interpretation of Mexican food, but to not get too far away from the blueprint. I want it still to taste familiar.” He and Marja have made extensive trips to Mexico City, Guanajuato, Morelia, and Oaxaca for culinary and design inspiration.

Chef Nathan grew up in a restaurant family and credits his father, legendary Austin, Texas restaurateur Charles Mayes, as one of his mentors. “I was working at dad’s restaurant when I was 14, and after graduation worked in a series of greasy spoons and sandwich shops before heading to the Culinary Institute of America in Hyde Park, New York.” After an internship at Santa Fe’s Coyote Café, and restaurant stops in New York City, he headed back to Austin, where he worked for five years for Shawn Cirkiel, Executive Chef and Owner of Parkside Projects – his other mentor in the culinary field. Through these varied experiences, he learned “pace, intensity, and focus,” and developed a culinary curiosity.

Located at 401 South Guadalupe Street in Santa Fe, the restaurant’s proximity to the Santa Fe Farmers’ Market is no accident. All dishes on the menu are scratch-made in-house, and all ingredients are carefully and sustainably sourced. “We have a dynamic relationship with the Railyard Market. The produce is exceptional from August through October, and we change our menu in the summer to incorporate as much as possible,” said Chef Nathan. Marja has always been dedicated to fresh, local produce as well. “What would you expect from a daughter whose mother who was the Tomato Bowl Queen in Jacksonville, Texas?” she says with a twinkle.

The restaurant has sourced chicken from Grant and Val Wilson’s Lotus Farms, LLC. in Tijeras, corn from Schwebach Farm in Moriarty, white beans from Jesus Gonzalez at his Gonzalez Farm in Alcalde, and produce from Mathew and Nina Ladegaard’s Ground Stone Farm Nambé, among other Santa Fe Farmers’ Market vendors. One farm stands out for them: Freshies of New Mexico, LLC in Velarde, which is owned and operated by Christopher and Taylor Bassett. Sun gold tomatoes, a huge variety of peppers, and oyster mushrooms are purchased from them. Marja added, “All of our desserts are made in-house, and when peaches are in season – there are none better than Freshie’s – we buy boxes of them!”

In return, Chris Bassett of Freshie’s said, “Marja’s commitment to local flavors is really strong. Her dedication to our farm went straight through the pandemic; it was extraordinary and so appreciated. Nathan moves through the season with us, and we see him creatively incorporate whatever fruits have ripened into his pastry, meat dishes, and even the cocktail menu.”

The relationship with Freshie’s deepened when Marja’s son Leo apprenticed at Christopher and Taylor Bassett’s farm. Chris shared that “Leo’s passion for organic farming was an extension of his passion for life itself. He was always living the best day of his life, and encouraged everyone around him to do the same. Leo would reliably commute up from Santa Fe to Velarde several days a week and plug into whatever project was being undertaken. He truly lined-up as my apprentice, with his love of learning evident in everything he did. As good as he was on the back end of things – really learning what it took to put food on the table, he was an absolute ace in the front-of-house when he was at the Market booth – his personal appeal was so high and his positive energy was infectious.”

Leo passed away on October 29, 2021 at the tender age of 21 in a tragic car accident. Marja honors Leo and his passion for small-scale agriculture each and every day – and symbolically through Day of the Dead marigold ropes created by Green Tractor Farm strung throughout the restaurant.

In addition to the marigold strings, Marja described the décor as “seriously local in many ways.” Everything is handmade: murals, menu design, and illustrations by Jessie Abrams Baca, striking photographs by Gay Block, art by Tim Jag, and patio tabletops that are hand-crafted locally by Stark Raven Fabrication. The tables will be on full display this summer when the stunning patio is open and serving 50 guests, along with a private dining space for another 18 guests – literally doubling the capacity of the restaurant. Their latest, adjoining venture is Esquina Pizza featuring local, fresh, wood-fired pizza which can be enjoyed on its pocket patio in pleasant weather.

Paloma was named Edible Magazine’s “Best Restaurant” in 2022, and Chef Nathan was named the Magazine’s 2020 “Best Chef.” One accolade that is important to Marja is being known for the best staff training in town. “We try to provide a healthy environment for our young staff, and there is a level of respect that is an underlying factor. We also invest in our team’s development. Our sous-chef, Mateo, joined us as a 19-year old intern and has developed beautifully under Nathan’s mentorship,” she said. “Last February, I sent Mateo, our cocktail creator and bar manager Andrea Duran, our floor manager Nicholas Garcia, along with Chef Nathan, to Oaxaca for a week. You could really taste the Oaxacan color and sparkle in our spring menu in both the fresh food and cocktails”

As for the future, Paloma intends “to grow with the community in lifestyle and density. We are friends with our neighboring businesses, and are well-situated with the New Mexico Rail Runner Express, galleries, The Vladem Contemporary, and the Santa Fe Farmers’ Market, of course.”

Let’s toast Marja Martin and Chef Nathan Mayes of Paloma with a copita of their signature Mezcal!