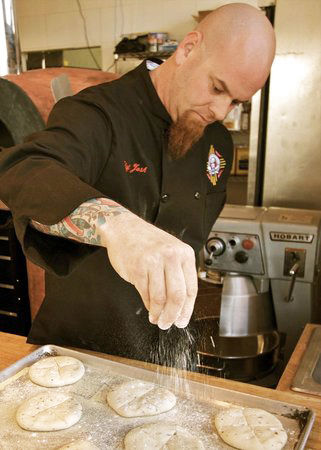 Chef Josh Gerwin is a native Santa Fean who attended the New England Culinary Institute, where he earned a degree AND their “Golden Tong Award” for best savory chef in his class. He served as sous chef at the prestigious Five Diamond Fairmont Princess Resort in Scottsdale, AZ. When he returned to New Mexico, he was the chief operator of the Curbside Café, a foodtruck which made high-end gourmet food affordable. In 2009, he briefly reopened the 300-year-old Casa Vieja in Corrales, featuring a New Mexican menu that was sourced from the local farmer’s market. In 2012, he started the food truck, Dr. Field Goods – where he began to fine-tune his signature fusion of New Mexican-Meets-the-World.

Soon, Chef Josh opened the brick-and-mortar iteration of the truck, Dr. Field Goods Kitchen. This was quickly followed by the addition of Dr. Field Goods Butcher Shop where he sells the best cuts of beef, pork, lamb, and goat. Both establishments exemplify his desire to use sustainable agriculture as much as possible. Chef Josh keeps open lines along all aspects of the food system – he sources locally and he never uses frozen meats, and he created the Kitchen for locals with an open lay-out. This allows the diners to connect with the Chef, see almost every step of their meal’s creation, and be reminded that they’re an integral part of the local food system.