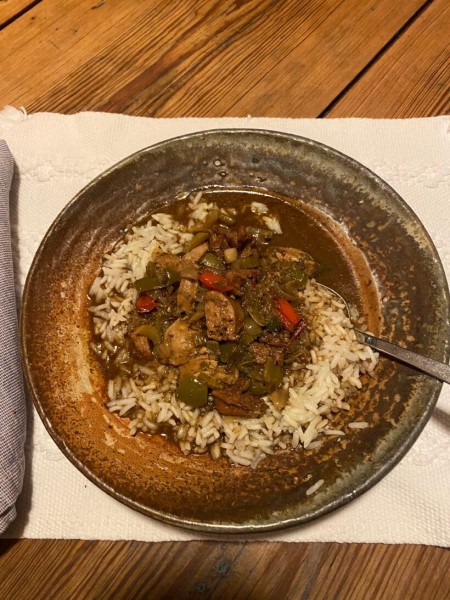 My favorite type of gumbo is seafood gumbo. Any combination of Gulf of Mexico ingredients will do – shrimp, crab, oysters. But Santa Fe, unlike my hometown of Houston, doesn’t abound in fresh catch from the gulf. So when I craved gumbo recently, I made one without seafood, adapted from a duck and Andouille gumbo made at Emmerline, a New Orleans restaurant. (This recipe was included in a January 9, 2019, article about gumbo in the New York Times.)

I didn’t have Andouille on hand, though I’ve often bought some excellent links from Red Mesa Meats. What I did have on hand was spicy Italian sausage from Red Mesa and leftover, frozen duck from Lotus Farms. I used a greater proportion of sausage to duck than the Emmerline recipe because I had more sausage then duck. And, after all, gumbo is a stew with infinite variations. And I had a roux on hand, one I made a few weeks before and kept in the fridge.

Missing gulf coast foods and traditions, I decided to put my gumbo together for dinner on Fat Tuesday. Though it didn’t hit the same spot as a seafood gumbo, it turned out fine. The Emmerline recipe recommends serving gumbo over either rice or potato salad. I served mine over rice. Gumbo over potato salad? I’ve never seen it! But as I said, the variations are infinite.