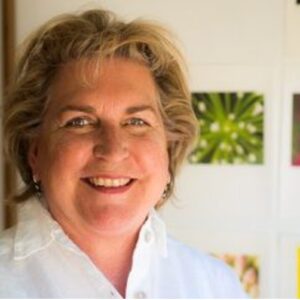 Lisa Kantor grew up in Tucson, Arizona.  After receiving a BA in Spanish from Arizona State University, she pursued a graduate degree at the Universidad Ibero-Americana in Mexico City, and ultimately received her MBA from the Anderson School at UCLA. She worked in commercial real estate throughout the Southwest: specializing in the acquisition or construction of warehouse buildings, shopping centers, office buildings and industrial developments.  She built and operated a Johnny Rockets restaurant in Santa Monica, CA.  Deciding to spend more time with her two adorable children, she sold the restaurant and managed of a small law firm in Los Angeles.  During those busy years, she even had a theatrical production of her screenplay BURIED SECRETS produced at the Autry Museum for Western Heritage in Los Angeles.  Now retired, Lisa has served on the Micro Loan committee since 2011.  She believes that social and economic justice begins with food, and that keeping our dollars in the local economy is the best way to assure a vibrant economic future for all New Mexicans. And food grown in New Mexico soil, under a New Mexican sun just tastes so darn good!!