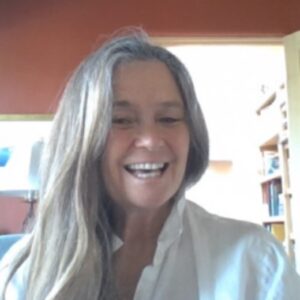 Gail Wadsworth was born and raised in Colorado. She is the former Executive Director of the California Institute for Rural Studies (CIRS). Retired after 10 years, she moved back to the Rocky Mountain West settling in Santa Fe, New Mexico.

During Gail’s tenure at CIRS, she designed and directed work on many research projects related to rural California. Many of these studies resulted in policy change, like increased safety procedures for workers on farms; increased funding for housing for California farmworkers; recent funding to relocate residents of a substandard mobile home park; and an increase in affordable housing in the City of Coachella. Our Census 2020 research was included as data in an amicus brief to the Supreme Court case from California opposing inclusion of the citizenship question.

She has worked on farms and with farmers for close to 40 years. Her varied jobs have included: in agriculture as a farmworker, in government for the USGS, in the private sector doing on-farm soil erosion research, in academia teaching classes on soil erosion and tropical soils and in various nonprofit roles.

Gail is happy to be a board member of the Santa Fe Farmers Market Institute and was drawn by the mission of advocating for farmers and ranchers in Northern New Mexico, increasing access to fresh, local food and supporting programs to help sustain a profitable, locally-based agricultural community. She works with the New Mexico Healthy Soils Working Group as a volunteer. She is a member of Slow Food Santa Fe. Gail was an advisor and helped initiate the recent COVID19 Farmworker Study that was implemented in California, Oregon and Washington and is an advisor to the Agricultural Justice Project.

Gail has a Bachelor of Arts in Anthropology and Geology and a Master of Science in International Agricultural Development/ Soil Science. Gail did post-graduate research in Geography at Royal Holloway University of London where she also taught.