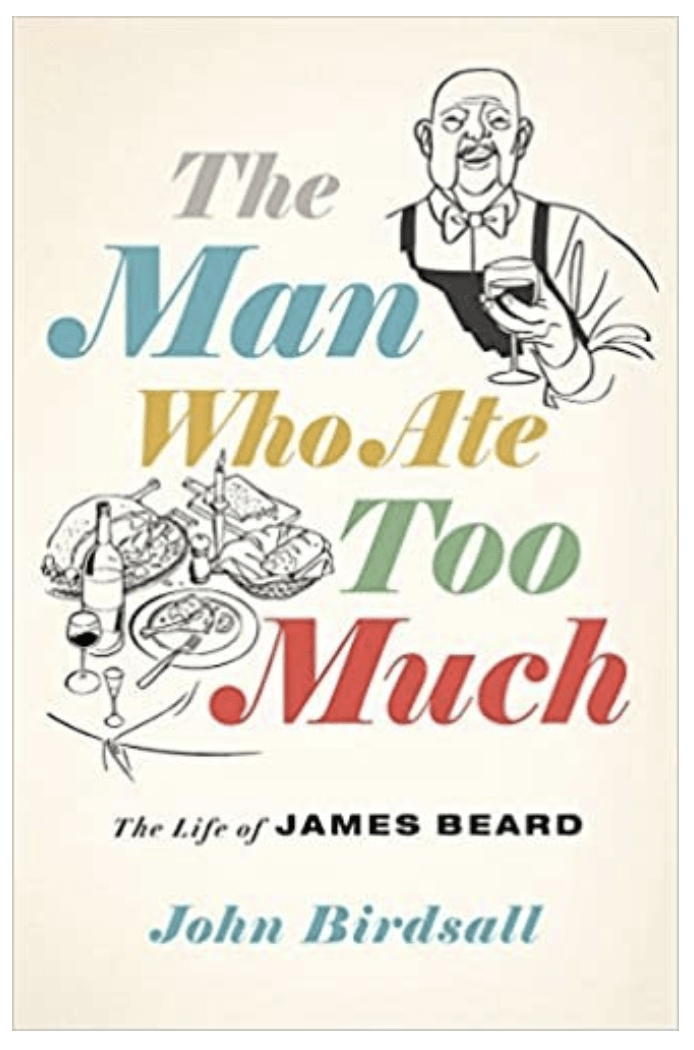 Dinner and a Book is held in a private residence. We coordinate dinner offerings so that we don’t find ourselves with a surplus of salads and desserts. Wine is welcome, but it is an add-on.

The Man Who Ate Too Much

The definitive biography of America’s best-known and least-understood food personality, and the modern culinary landscape he shaped.

In the first portrait of James Beard in twenty-five years, John Birdsall accomplishes what no prior telling of Beard’s life and work has done: He looks beyond the public image of the “Dean of American Cookery” to give voice to the gourmet’s complex, queer life and, in the process, illuminates the history of American food in the twentieth century. At a time when stuffy French restaurants and soulless Continental cuisine prevailed, Beard invented something strange and new: the notion of an American cuisine.

Informed by previously overlooked correspondence, years of archival research, and a close reading of everything Beard wrote, this majestic biography traces the emergence of personality in American food while reckoning with the outwardly gregarious Beard’s own need for love and connection, arguing that Beard turned an unapologetic pursuit of pleasure into a new model for food authors and experts.

Born in Portland, Oregon, in 1903, Beard would journey from the pristine Pacific Coast to New York’s Greenwich Village by way of gay undergrounds in London and Paris of the 1920s. The failed actor–turned–Manhattan canapé hawker–turned–author and cooking teacher was the jovial bachelor uncle presiding over America’s kitchens for nearly four decades. In the 1940s he hosted one of the first television cooking shows, and by flouting the rules of publishing would end up crafting some of the mostexpressive cookbooks of the twentieth century, with recipes and stories that laid the groundwork for how we cook and eat today.

In stirring, novelistic detail, The Man Who Ate Too Much brings to life a towering figure, a man who still represents the best in eating and yet has never been fully understood―until now. This is biography of the highest order, a book about the rise of America’s food written by the celebrated writer who fills in Beard’s life with the color and meaning earlier generations were afraid to examine.

If you are vaccinated and wish to join the Book potluck dinner and discussion, please respond to ellenlampert@q.com for more information.